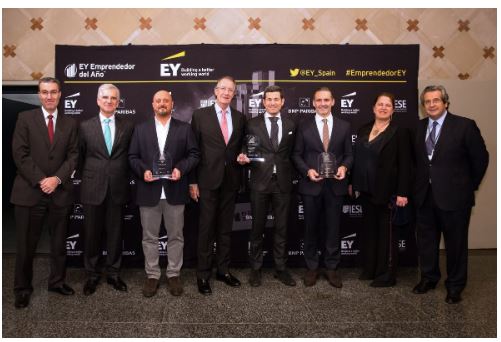 José Francisco Adell, CEO of Grupo Julià, Salvador Ramon, Managing Director of Frime, and Albert Campabadal and Cristian Rovira, President and Vice-president respectively of Grupo Sifu were announced as finalists from Catalonia to the Entrepreneur of the year Award. This is an award that is sponsored by BNP Paribas with the collaboration of IESE Business School. The aim of the award is to recognise the business accomplishments achieved by entrepreneurs as well as their leadership ability and innovative spirit.

The event to announce the candidates from Catalonia was held at the Capella del Convent dels Àngels del MACBA and brought together over one hundred representatives from the Catalan business sector as well as the finalists from previous editions of the event. Attendees from EY included José Luis Prada (Partner responsible for EY in Catalonia) and Xavier Pujol (Partner from EY and person in charge of the Entrepreneur of the Year Award in Catalonia). Also participating in the event were Cecilia Boned, President of BNP Paribas in Spain and Juan Roure, a Professor at IESE Business School.

José Francisco Adell, Salvador Ramon and Albert Campabadal and Cristian Rovira will compete with the rest of the national finalists before a jury comprised of prestigious personalities from the business, institutional and academic sectors, who will evaluate each one of the candidates and will select the national winner of this award. The winner will be announced in an event that will take place on 28 February in Madrid.

Also among the finalists of this edition of the Entrepreneur of the Year Award were Ángel Haro, President of Prodiel (Andalusia and Extremadura); Francisco Pino, R&D Director  of Marine Instruments and Iñaki Arbulu, CEO of Grupo Arbulu (Galicia); Carlos Calero, Managing Director and CEO of Vincci Hoteles; Isabel Martínez, President of Grupo Panstar and Carlos Moro, President of Bodegas Familiares Matarromera (Central Area); Basilio García, CEO of Calzados Hergar, and Iñaki Velasco, Founder and CEO of Gescrap (Northern Area). Soon we will announce the candidates from Canary Islands, Valencian Community and Region of Murcia.

This year, EY holds the twenty third edition of the Entrepreneur of the year Award, which is an initiative that began in 1986 in the United States. The Spanish winner of this edition will compete at Monte Carlo against about 60 representatives from around the world to win the EY World Entrepreneur of the Year Award. Further information about this initiative can be found on the EY Entrepreneur Award Website. Follow the latest news on Twitter @EY_Spain and hashtag #EmprendedorEY.