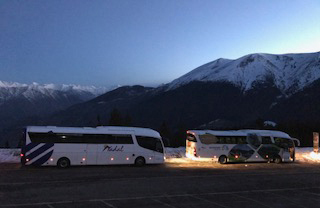 The weekend of 24 and 25 February saw the third edition of AndorraSkimo, the première long-distance cross-county team skiing event in the Pyrenees, which once again brought together the best professionals in this speciality, as well as cross-country skiers and fans. Partnering with this year’s competition was Autocars Nadal, the passenger transport company in Andorra, which is part of the Grupo Julià and was charged with transporting the skiers during the competition.

This year’s AndorraSkimo featured two different routes, Skimo 6 and the new Skimo 10, which was designed to go all the way around Andorra by linking the Principality’s three stations and its two valleys.

First up in the competition was Skimo 6, a 30-km route linking six refuges over a 2000-m elevation change which took place in a spectacular setting in the Madriu-Perafita-Claror Valley, with no great technical challenges. This was followed by Skimo 10 on Sunday, which was a 10-refuge route that added 40 km to the previous Skimo 6 route and climbed over 5000 m.

This was the first time that Autocars Nadal took part in AndorraSkimo, and is one more initiative of the many that the company has undertaken in Andorra, such as Direct Bus, a scheduled line that connects Barcelona and Andorra, which has partnered with Assandca, the Andorran cancer society. In 2015 the company and the society signed a partnership agreement to offer free travel to Barcelona for patients undergoing radiation therapy.